I’ve said this before, but learning a language is difficult. So much so, that the other night I started having an existential crisis about conversation. Or dear god!- maybe I’m beginning the transition into Frenchdom. 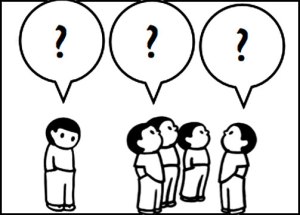 thanks ilmkidunya.com for the visual representation of my emotions

As I sat there, lost in translation (aka French slang), my mind drifted from “what are they talking about?” to “why do we even talk, postulate, argue, discuss? What’s the point of it all?” I guess things can get a little grim when your confusion turns to silence and your silence turns to the wanderings of your own mind…

Needless to say, that was a bit of a wake up call reminder- learning a language is hard and I need to saddle up. Apparently for me, it’s easier said than done. Learning a language is not like riding a bicycle. The wheels of language knowledge don’t magically set in motion when you summon them. Unfortunately if you don’t use it, you start to lose it. I’ve plateaued with French before and apparently I’m doing it again.

Oddly enough, living abroad increases my language laziness. Maybe it’s due to the fact that I’m surrounded by French constantly and don’t feel the need to practice, to write down, to make efforts outside of the day-to-day life. True, my comprehension has drastically increased, but when I speak, I still stutter and stumble through French.

My laziness peaked when I reached a point of desperation that led me to googling language learning quick fixes. As if that wasn’t bad enough, I didn’t just google. My search led me to eHow in an effort to discover some obvious secret to becoming bilingual. Spoiler Alert- there isn’t one.

It takes time, and it takes patience (I bolded that for myself. Is bolded a word? It is now…).

But out of the rock bottom that was eHow came renewed determination. They actually provided some good (if not obvious) advice:

“First commit to learning another language. It will take time and dedication. It will have its ups and downs.”

True. I need to commit. Really commit. And this is definitely a down point. But next will be up! …right?

“Don’t let a day go by without learning a new word, practicing your listening comprehension, watching a movie in the target language, conversing with someone, or anything else that will improve your capability. You don’t have to spend 4 hours a day, but you do have to spend 15 minutes a day as a minimum.”

Many days have gone by with no new vocabulary. True, I’ve heard new words, but I haven’t learned them. Commit. Make efforts.

As my friend Diego once said about learning English, “It’s not real. It’s like I’m gaming. Like I don’t really know what I say and it’s a game.” From the beginning rush of excitement decoding letters and sounds, to connecting the pieces of comprehension, learning a language can feel like a game. Your voice is foreign and your words aren’t your own. And while it does have its ups and downs and can be quite the adventure, I must remind myself that learning a language takes time, commitment, effort, and practice.

Because trust me, you don’t want your plateaued laziness to send you into an existential conversation about conversation…in your own head.

What are your language learning secrets?

4 thoughts on “Adventures of Language Learning”